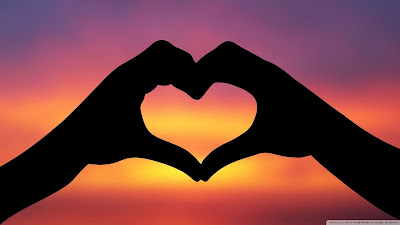 My husband and I met when we were just 16 years old. We dated for almost 5 years before getting married at the age of 20. We only lived in the same town for maybe a year at best. The rest of the time we lived about 5 hours apart.
Mind you, this was long before the age of the internet, video chats, or cell phones. Long distance phone calls were a luxury- meaning they were expensive, and you needed to get your parents permission. So most of our communication, during the 4+ years of dating was done by mail- thank you good old U.S. Postal Service! Yes, snail mail. We spent days composing our letters, mailed them off then started our next one. We'd wait to get a letter in the mail and when it finally came we'd read and re-read it over and over again until we almost had it memorized. I know this sounds silly now days but that's the way it was back in our day.

When it comes to relationships, boyfriends and girlfriends, it can get confusing. Society tells us it's all about the physical, you have to be compatible. Date lots of people before you settle down. I believe just the opposite. I believe you should start by being friends. So many times young people are so excited about having a boyfriend or girlfriend they forget to just be friends. To enjoy the other person and get to know them. Don't be in such a hurry. Don't fall for the lie that we always have to have to have a significant other in our life. Take time to get to know who you are. To get to know the other person. Take time to learn what you want in a spouse.

I believe the main reason for dating is to find a mate, someone to marry. So if you're not ready to marry, why date? I know this sounds old fashion, and maybe even crazy, but hear me out. I didn't always believe this. But as I've gotten older, it makes since to me. You see, I believe it's important to learn how to interact and communicate with the opposite sex first. Hanging out in mixed groups, with other couples or each others families is a great way to do this. Being in group settings lets you observe others. You learn proper behavior and etiquette  by watching trusted and respected friends and adults. You learn how to talk to others, how to treat others and how to listen. You learn what is important to yourself and others. Groups also help hold you accountable for your words and actions. You learn how to respect yourself and other people. Young men be a gentleman, respectable- not crude. And young women be modest and act like a lady. Another way is to look for couples you admire who have successful marriages. Talk to them, watch them, ask them to mentor you. These are things that can help you decide what traits are desirable- or not desirable in a spouse. Everyone should have, at least, a mental list of things they want in a spouse. Know the things that are going to be non-negotiables in your spouse and marriage.

Several years after we were married, one of our pastors commented in a sermon that holding hands would lead to pregnancy. We almost burst out laughing. Being young and naive, we thought he might need someone to explain the birds and the bees to him. We didn't understand the connection. Years later we did. You see, once you start getting physical, things escalate quickly. You start holding hands, eventually that's not enough so you move on to kissing, then that's not enough and you have to continue more and more to get that same excitement, that same thrill. Then next thing you know, someone's pregnant. You didn't mean for it to happen but in the heat of the moment we loose control. We're humans and we make mistakes.

If we take the time when we're young to learn how to relate to each other, before we get to the physical part, then when we are ready to make the commitment of marriage we will be much better equipped. I firmly believe that if we slow down and take control of ourselves, our lives will be better in the long run. We will be more confident,be more able to express ourselves and we won't have to worry about excess baggage that is often time brought along from previous relationships. By taking control of ourselves we honor ourselves and our future spouses.

Marriage is a life long commitment to each other and God. In order to ensure that we make it "till death do we part" we need to remember failure is not an option. We need to be working on our marriage long before we are married. We need to remember that our decisions today will effect our marriage later on. We do this by being focused, when dating, on the end result which is marriage. Remember, marriage won't always be romantic, mushy or sexy. Sometimes it will be hard, frustrating, and messy. Other times you'll just be hanging out with the other person. Wouldn't it be nice if you liked each other and were friends?

Generation to Generation
We're Russ and Becky Henrich, husband and wife. We don't have any titles or letters behind our names. Our degree comes from walking the bumpy road of life and the bible. We are the parents of three wonderful adult daughters and are currently youth ministers at our church. Our desire is to help youth transition into adulthood and help parents get them there by using the instruction found in the word of God and our experience.